The University of Redlands, my alma mater, celebrated it's centennial in 2006-2007. Because of that, there was a float in Pasadena's New Year's Parade on January 1, 2007. After being introduced to the delight of painting in the float barns by my painting buddy, Brenda Swenson, I secured permission for us to visit the Redlands float as it was being readied for the parade. 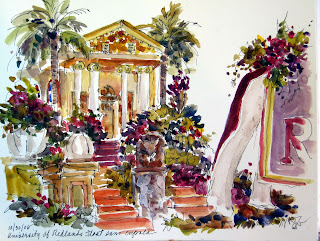 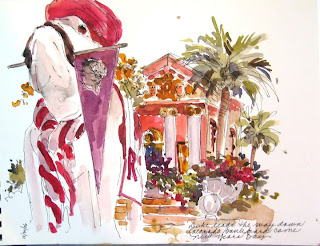 We had to be creative since the floats were overhung with scaffolding, crawling with petal-pushers and without much of the planned flora. Adding to that was the necessity of our taking as little space as possible so we would be out of the way of the workers.

We took in our sketchbooks, a small watercolor palette and waterbrushes. These brushes are filled with water and when you change color, you squeeze out some water to cleanse the bristles. The two drawings here were done in that way. The colors are amazingly clear and un-muddied. The brushes are available at most art supply stores and on-line suppliers - my favorite are those made by Niji.
Posted by Judy Schroeder at 4:27 PM