More Explorations with Ink and Watercolor

I have to admit that the element of design that most speaks to me is line. I love the quote that says "drawing is taking a line for a walk'" although I prefer thinking of it as a dance! My fascination with ink and watercolor is long term and I enjoy playing with all the possibilities. The image selected for this blog came from a barge trip from Prague to Berlin in 2008. We had a very brief time in Torgau on the Elbe River so I only got photos. The town is most well-known as the place where during the Second World War, the US Army forces coming from the west met with forces of the Soviet Union coming from the east during the invasion of Germany on April 25, 1945.
Since I'd had no time to draw on site, I sketched from the image on my camera after returning to the boat. From that drawing, I created the other versions after returning home, each using a different pen or watercolor and/or paper. I like to replicate the same image for teaching for two important reasons. First, I can re-draw each one with increasing speed since it is familiar territory and secondly, my students focus on the lesson without being distracted with different subject matter each time.
I've included the photo reference, initial drawing in a small sketchbook and subsequent explorations with various tools and applications, the most recent being 24 hours ago. 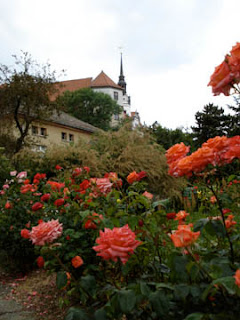 Photo reference - I crouched down on the path so I could get the sharp angle with the roses in the foreground. My drawing is fairly detailed in the blooms on the drawing but much less so in the drawing/watercolors. 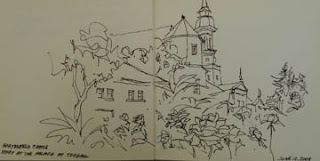 Sketchbook drawing - The sketchbook is 5 1/2" x 11" when open. I've been surprised to be able to get drawings from the camera and it helps in future work. 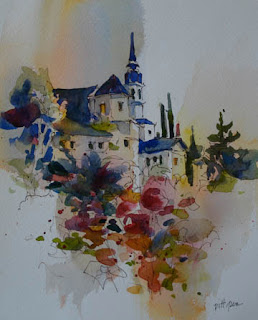 Torgau#1 - The drawing was first and done with a permanent black pitt pen. The underpainting was added next followed up with watercolor, loosely applied. No movement of ink here! 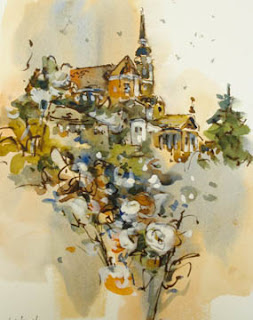 Torgau#2 - Underpainting came first here since I drew with the pentel color brush in sepia which is water soluble. Watercolor was added and since I'd lost the white with the underpainting I added white gouache for the roses, etc. 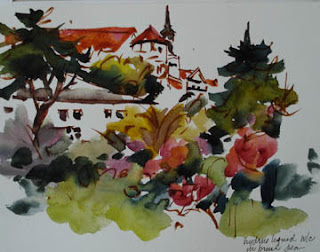 Torgau#3 - Pentel color brush in sepia was used here and I added hydrus liquid watercolor to the line drawing. The smoother paper makes the watercolor sit on top and perhaps the liquid watercolor too. I've only experimented a bit with it so I have lots to do yet. The watercolor didn't move as much as I thought it would, but then again with my inexperience it may be "operator error" and not the medium at all. 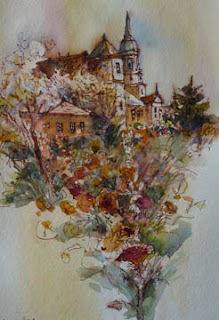 Torgau#4 - Underpainting was done first with a line drawing done with a stabilo brown pt. 88 pen which is water-soluble. The first step after the drawing was a wet brush over the line to establish a value pattern. Then watercolor was applied, more drawing, more watercolor and finally white gouache.

My painting buddy, Brenda Swenson and I are always on the lookout for new and interesting tools, especially ink pens and brushes. It's thanks to her that I have the stabilo pens which I am going to love using! At the end of yesterday, after exploring with this new pen I was energized in spite of a having cold and fatigue from a large family party at my home two days prior. That's about as good a recommendation for this sort of activity as I could make.
Posted by Judy Schroeder at 5:37 PM