Shortly after I opened the gallery in 1998, I found I needed to take a break and go "paint-about." I was planning on visiting my sister in Central California and needed a goal so I would use my time away carefully. Since we have now 4 generations of teachers in my family I decided to do early schoolhouses. My grandfather was a headmaster of schools in Maine before moving to California, my three great-aunts went to Normal School and then taught and my mother taught in a two teacher school for her first assignment.
The project continues and I have collected, artistically, many tangible examples of early California and observed the affection that the communities had for these important structures. They served not only as places of learning but also gathering places for voting, civic events and other purposes. Here are a few examples: 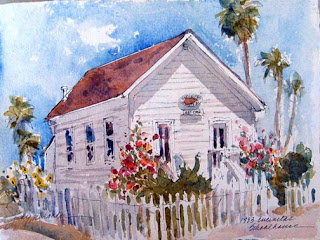 Encinitas, CA
The schoolhouse was built in 1883 and has been moved at least once. It's very near the beach so sea sponges were used to clean the blackboards. The building is now used by the Encinitas Historical Society. 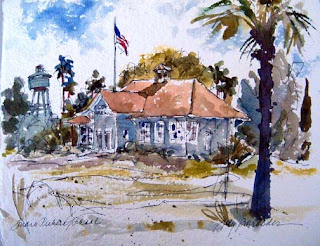 Indio, CA
Located in the desert, the architecture of this building included wide eaves for shade. By doing a general series such as this, I was able to observe changes in style according to the weather in certain regions. Also I'm convinced that some plans were shared. I saw one plan done on linen which was one of the more common styles of building. 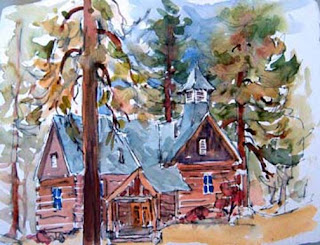 Fallsvale, CA
Located in the mountains, the pitch of the roof is a clear indication that snow falls here! The logs were used with the bark still intact although it is now coming off. The building now is used as a community center. 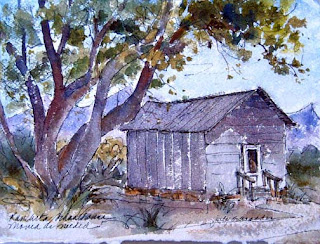 Ranchita, CA
Looking more like a shed than a schoolhouse, Ranchita's school had windows on only one side which was necessary for stability. Located just outside Anza Borrego Desert, the schoolhouse served the miner's families. Because the schoolhouse was not used in one particular area, it was outfitted with skis so it could be moved as needed. I drew the side without windows to emphasize the unique structure.

The "hunt" for the schoolhouses has been a real treat and since the paintings are small I can do one quickly. Learning a bit about the history of the school and the area makes it all more interesting.
Posted by Judy Schroeder at 1:25 PM